One year in to the pandemic

I think the first time I ever heard of Covid-19 was this viral thread. I didn’t pay it much mind, and I didn’t hear much more about it for the next week or so. It sounded bad, but it was in China, and not really something we would have to worry about. It sounded like it would be another SARS, which got a lot of news coverage, and then… well, I’m not really sure. It went away, at any rate. On this same day, I got an all staff email at work about it. It didn’t say much, but provided a few links to the CDC, the WHO, and the US Embassy in China. The gist of this, and the next email that followed on January 28, was that this was a problem in China. Employees who had been there were to isolate and all business travel there was cancelled.

Things started to bubble up over the next two weeks. There was a steady stream of news stories and tweets. It wasn’t going away, and it wasn’t confined to China. Throughout February of 2020, it because a regular topic of conversation at the office. Some people were actually starting to bother people by discussing it too much. By late February, the possibility of shutting down the office for a few weeks was being discussed, as if we could just dodge the whole thing by laying low for bit. It actually seemed a bit extreme at the time, but it turns out we were just ahead of the curve. I give the organization’s leadership a lot of credit here.

On Saturday, February 29, I was was about to start packing for a work trip to Denver, to attend one of the big annual events that my organization runs. At exactly 9:30 p.m., I got a text from my boss: 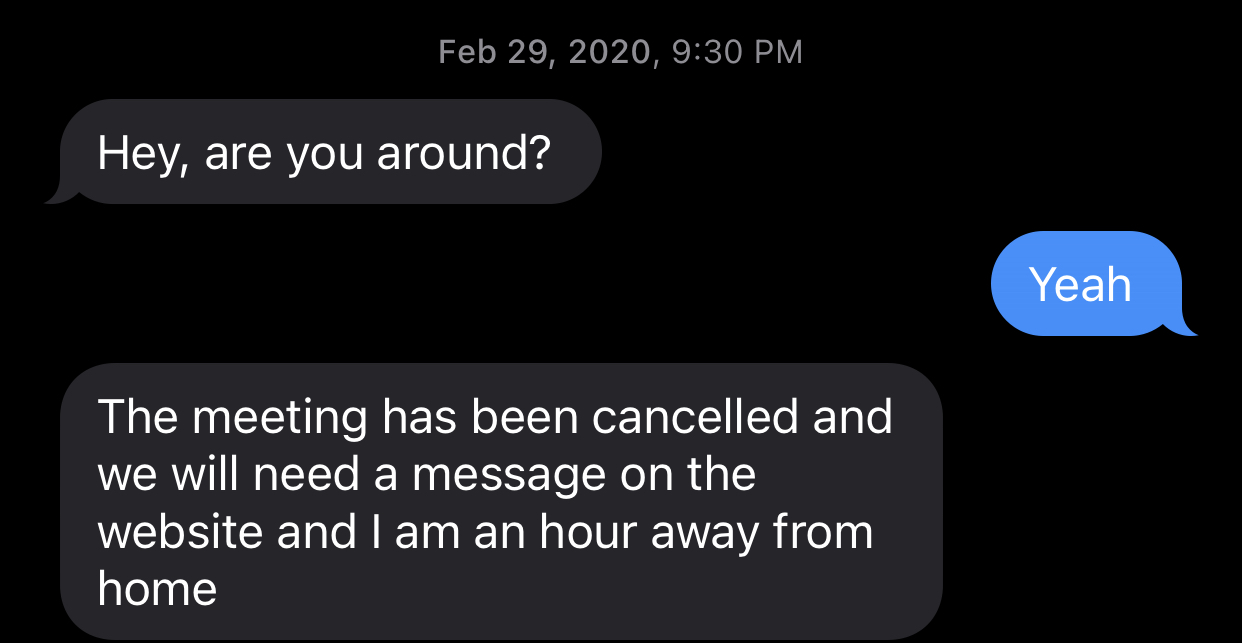 I had been paying attention for over a month, but this might be the moment when I finally realized just how serious this virus could be. At the end of that week, I visited my hometown and saw my parents in person for the last time (until this past week) when my sisters and I drove up for the funeral of a close family friend. We stopped at the Costco in Harrisburg on the way, and while it was a fairly quiet Friday afternoon there, we naively thought we might still be able to buy hand sanitizer. No such luck.

While we were in Pennsylvania, news broke of the first cases in Maryland. Back at work, plans for the shutdown were being finalized, and my hands were in rough shape from all the washing. On March 10, one day before the WHO declared Covid-19 a pandemic, we got the all-staff email informing us that starting on March 16, we were closing the office until further notice. Business travel was cancelled until May 31, indicating that there was still an expectation that things would be back to more or less normal before long. Outside of that announcement, I was being told this would probably be for two or three weeks, but with a strong we’ll see caveat attached.

One year ago today, March 13, was the last “normal” day. It was a weird day at work, and the mood was subdued. It seems like most people didn’t come in at all or left early. I was out the door by 3 p.m., hoping to pick up toilet paper at Costco. No luck with the toilet paper. No hand sanitizer either.

I rolled my eyes at the sight of a woman wearing an N95 mask in the store. We had been told, quite clearly at that point, that it wasn’t airborne. That was the last time I was in a store without a mask.

There’s a real chance that I may never work full-time in an office again. It turns out rent is mostly a just a hole companies throw money in to put people near each other. We made it this far and we all managed to adapt. Last year’s conference was cancelled 35 hours before it was supposed to start. This year’s conference will happen online, starting on Monday morning.

We learned a lot of lessons over the past year. Most people are every bit as good as we had hoped, and some are much, much worse than we might have guessed. The virus is still raging, but the end is in sight. I don’t care for the phrase “new normal,” because everything is always changing, even when things seem normal. “Normal” suddenly became something totally different for most people when they left work on March 13, 2020. I saw the change happening in front of me when I stopped at Costco.

What’s now clear to me is that the normal from before that date will not resemble the normal we have over the next year, any more than it resembled the normal from the past one. This past year was mostly good for me, but it wasn’t an easy year for everyone. Being home all the time works for work, but it doesn’t work for school. That part has been the most stressful for everyone in my house, but that’s about to change.

My daughter will start going to school, four days a week, every other week, starting on Monday. Exactly one year after the last time she was in a classroom. If all goes as planned, that’s 31 days in the classroom between now and the end of the school year. It’s better than nothing from an academic standpoint, but a massive risk according to how we’ve been living for the past year.