Spoiler alert! There are some spoilers for Avengers: Endgame in last two paragraphs.

I have created a graphic illustrating the definitive order for watching the movies of the Marvel Cinematic Universe. I’ll spoil it for you: It’s the release order.

I came across a garbage image from a Facebook page. Rather than give shitty Facebook pages what they want, and “engage” on that terrible platform, I’m going to put my correct version here. 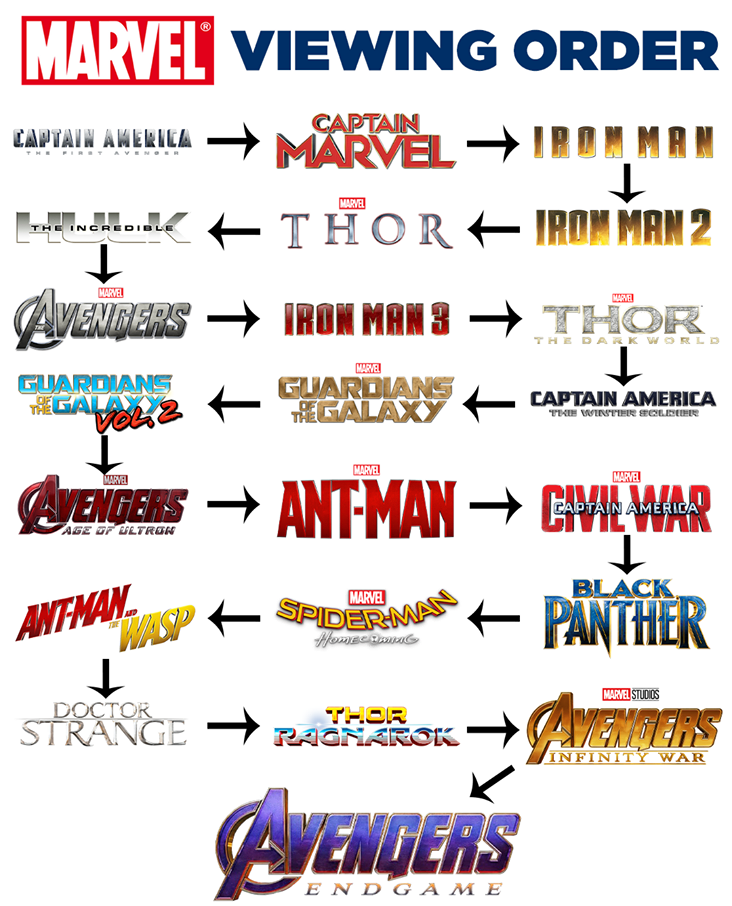 There’s a lot wrong with this. It basically shows the chronological order of events… except that it’s completely wrong in some places. Ant-Man and the Wasp and Doctor Strange seem to be placed completely randomly. It’s such an obvious error that I think it was done intentionally in order to stir conversation on Facebook. At any rate, it’s just not possible to put these movies completely in chronological order, because some scenes in the movies happen after other movies entirely.

Here’s what I threw together:

The truth is that it’s not necessary to see every movie in a particular order in order to understand everything. There’s just some movies you need to see before others. You can probably also take or leave a lot of the post-credits scenes, which further frees you up to watch things in other orders.

My chart doesn’t show every credits scene, only the ones that link movies together when there’s nothing in the main action. I don’t think any of the stingers are absolutely necessary to understand any other movie, but they do help establish a viewing order if you’re a completionist.

In my graphic, which I’m willing to concede is probably not actually definitive, I just try to make the connections. If a post- or mid-credits stinger leads into the start of a series, that essentially means the thing with the stinger isn’t necessary to understanding the next movie. If you’ve seen none of these, you can actually start with Iron Man, Captain America: The First Avenger, Thor, Guardians of the Galaxy, Ant-Man, Doctor Strange, or Captain Marvel without feeling like you’ve missed anything.

The flip side here is that all of these eventually lead up to the convergance points: Avengers, Avengers: Age of Ultron, Captain America: Civil War, Avengers: Infinity War, and Avengers: Endgame. If you want to get the full experience, you’re going to have to watch everything that leads up to those movies.

Some movies are also more skippable than others. Iron Man 2 doesn’t do much to lead up to Avengers, but it does introduce Black Widow, and it puts James Rhodes in the War Machine armor for the first time. Iron Man 3 doesn’t really lead up to Age of Ultron, but it is a fun movie and it establishes Tony Stark’s PTSD after the events of Avengers, which is a very big part of his overall character arc.

Even Doctor Strange, which you should see simply because it’s a visually stunning film, doesn’t really lead into Infinity War. It introduces the Time Stone, Stephen Strange, Wong, and The Ancient One, but Infinity War gives a good enough explanation for the Time Stone, and none of the other characters know who these people are anyway. Endgame probably tells you enough about The Ancient One in her scenes that viewers could figure things out without having seen Doctor Strange.

There are a lot of different orders you can watch these movies in, but if you you want to see everything, the simplest thing to do is just watch them in the order they were released.